Programming alone is sometimes difficult, but one programmer can only do so much. It’s better to work as a team. Groups of programmers can share the load, but having multiple people working on the same code adds additional challenges.  You’ll need extra communication to keep everyone productive, and additional tools to keep from losing work.

Probably the most popular revision control system right now is git, a distributed version control system created by Linus Torvalds, the same guy who created Linux. You can use git from the command line, or from within development environments such as Eclipse, IntelliJ, and Visual Studio Code.  GitHub is a web-based hosting service for git, and the GitHub corporation is a FIRST sponsor.  All programming mentors and students can get free GitHub accounts, and FIRST teams can get upgraded Team Accounts.

Combinations of the code files are called “commits“, and the word “commit” here is both a noun and a verb.  Committing your changes creates a commit that you can retrieve later.

OK, I know that that was a lot of information.  Honestly, git is a really deep subject, and companies that use it develop really complicated methodologies for its use.  I do not recommend that FRC teams try to use everything in the git toolkit, or try to emulate commercial practices.  Especially at first.  Instead, let’s lay out the minimal functions.

You are not required to install git, since there is a version packaged within Eclipse.  However, you may choose to install it anyway.  Instructions are at:  https://git-scm.com/ .

You should configure git to know who you are.  This information will be added to the repository very time you commit.  Open the Eclipse Preferences dialog and select Team > Git > Configuration.  Add user settings for “user.email” and “user.name”:

Suppose that there is a repository on GitHub that you’d like to download to your laptop.  Making a local copy is called making a clone.

Consider the code repository at:  https://github.com/firebears-frc/testrobot0.  Go ahead and visit that page in a browser.  Press the green button labeled “Clone or Download” and then press the little clipboard button.  This will copy the repository’s formal URL into your clipboard.

At this point you now have a clone of the repository on your machine.  You won’t be able to push changes up to the remote repository unless the owner has granted you permission, but you can read, edit, and deploy this code to the robot.

Suppose you have a robot project on your local machine that has never been under git control, but you’d like to upload it into GitHub.

Open the project in Eclipse and then open a browser to https://github.com.

Committing changes to the code

From now on, when you add files, delete files, or modify files, git and Eclipse will keep track of how your code differs from the most recent commit.  The Git Staging view keeps track of what has changed.  When you are ready to make a commitment, drag the files you want committed into the “Staged Changes” area.  Usually you’ll commit all changes, but you might choose to just stage a subset.

Type in a commit message.  Try to write informative messages, since you and others will be reading this later.  Good messages say things like “Updated autonomous commands for new encoder” or “Code changes after first regional”.   Bad messages contain jokes or gibberish or say things like “changed stuff”.

After entering a useful message, hit the “Commit” button.  This will commit your changes locally, but will not yet push those changes upstream to Github.

Pulling changes back from the repository

Suppose someone else has made changes to the code and pushed them up to the remote repository.  You’d like to fetch those changes and merge them into our code.  This is called doing a pull from the remote.

You can pull at any time, but it is usually best to commit your code locally before pulling.  That is to say, commit the code but don’t push it up yet.  Follow the directions in the previous section to do the commit.

To pull down changes, right-click on the project and select Team > Pull.   The best case scenario (which is usually what happens) is that upstream changes will be seamlessly added to your code and everything will work perfectly.

One thing that might go wrong is that the changes pulled in will invalidate or undo something you are doing.  You should always look over the incoming changes.  Check the Problems view in Eclipse to see if new errors have been added.  Recompile and run any relevant tests.

The worst case scenario is that someone else will have changed files that you are working on, and you will need to “merge” changes.  The Git Staging view will show which files are in conflict.

Right click on one of the conflicted files and and select the Merge Tool, which will show the differences between your commit and the incoming commits.  In the picture below, local changes are on the left and incoming are on the right.  Edit the left pane to be the compromise between these changes.

After you’ve modified a conflicted file and saved the changes, go back to the Git Staging view and drag the into the “Staged Changes” area.   After merging all the conflicts, hit the “Commit” button.

Pushing your changes up to the repository

If you are ready to release your changes to the rest of the group, you can push your commits up to the remote repository.

If you are the only programmer working on a repository, you can push changes from the Git Staging view and its “Commit and Push…” button. 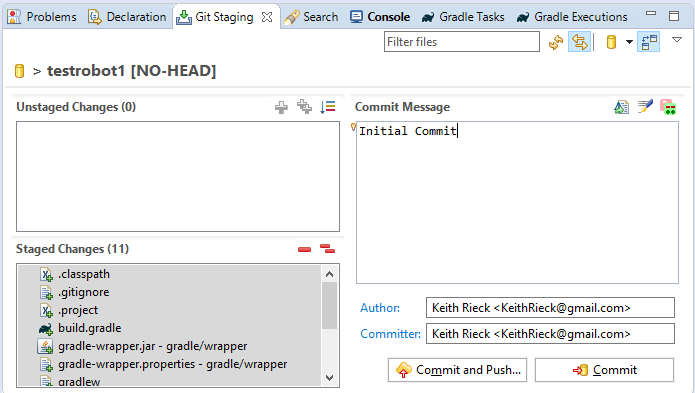 If  there are multiple programmers, you should just “Commit”.   Later, you can push all changes by right-clicking the project and selecting Team > Push to Upstream.

Synching with the remote repository

There’s an important discipline that everyone must develop with respect to the remote repository, which is that you should always pull in remote changes before pushing up your own.  If there are incoming changes, then you must recheck the merged code to verify that it is OK.

With multiple programmers, you should perform the following steps manually:

FRC robot programs will be built using GradleRIO, which can execute from inside any development environment.

You must install Java.  Even if you will be developing in C++, you’ll need Java installed to run Eclipse and GradleRIO.  You should define your JAVA_HOME environment variable to point to your JDK installation.  Often setting JAVA_HOME is considered optional, but I have seen many strange situations resolved after this variable has been properly set.

You should obtain and run the WPILib one-step installer (available at the beginning of the 2019 season).  Even if you’ll be developing with Eclipse,  you’re likely to need the tools and project templates included in this package.

It is recommended (though not strictly required) that you also install git, instructions for which are at: https://git-scm.com/ . 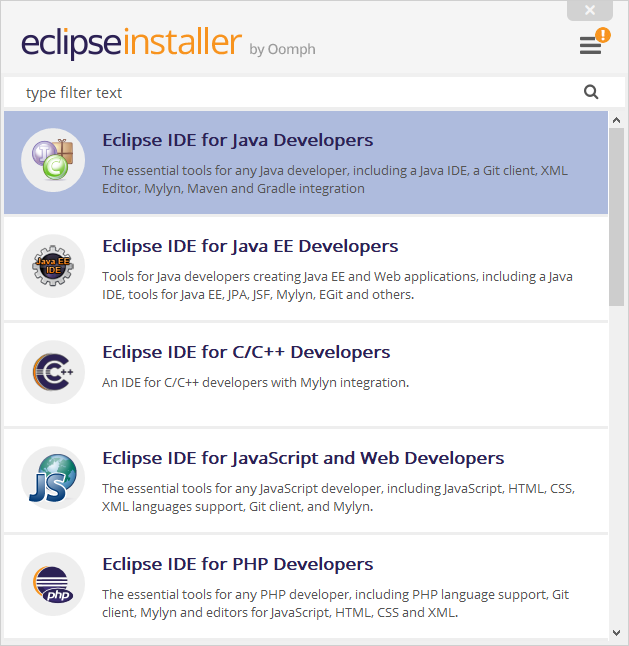 Eclipse is a big program, and you should consider looking at the online documentation. Here are a few concepts to get you started: 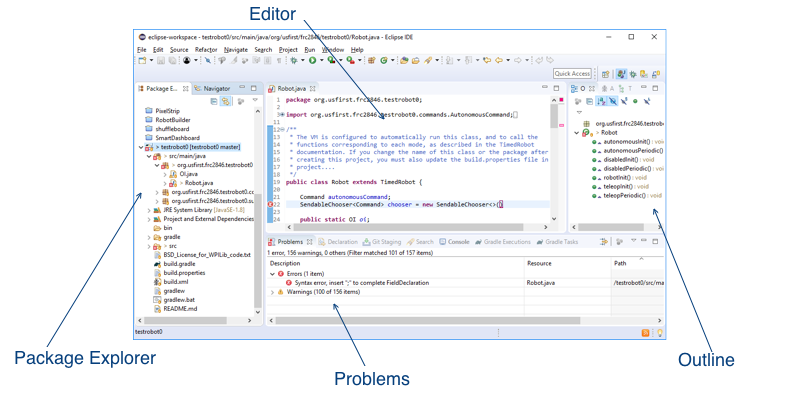 Now we’ll want to install a plugin to Eclipse that makes it easier to build and deploy your robot programs.  Click on the Help menu and select “Eclipse Marketplace…”  In the dialog’s find box, type “Buildship Gradle”.  Click the Install button for the Gradle plugin.  Eclipse will need to restart to complete installation.

After the restart, open the Eclipse Preferences dialog and click on the “Gradle” item.  Make sure that “Gradle wrapper” is selected.  Apply and close.

Click on the Window menu and select “Show View…” and “Other…”.  Find the “Gradle” item and select “Gradle Tasks”.   The Gradle Tasks view is where you will build and deploy your robot programs.

Creating  new robot programs in Eclipse is a lesson I’ll defer to another tutorial.  For now, you can download an existing project and verify that Eclipse can build robot programs.